4 Traits for Success: How Kids & Parents Can Be Resilient in 2020

While nobody can predict the challenges that today’s children will face as adults, child therapist Vivian Morgan has helped enough children and teens to pinpoint certain predictors of a child’s ultimate success.

Morgan has seen children of all ages, circumstance and ability. She says she’s found that the strength of a challenge facing a child matters less than the strength of the child’s resilience.

Resilience, says Morgan, is made up of four components that “like muscles,” require regular use to strengthen.

Parents can either help this effort — or hinder it.

Morgan says fostering the following qualities can help a child build the resilience that he or she needs to reach his or her potential, no matter how complex and unpredictable the future may seem.

So, as we step into this new decade, let’s take a closer look at this. Grit
“Grit might be the most important” component of resilience, says Morgan. By grit, Morgan refers to the “tenacity of the human spirit to keep going after a setback,” and the “willingness to work through uncomfortable scenarios in
pursuit of a greater goal.”

Morgan understands the temptation to do this: After all, parents have “years of problem-solving practice.” But doing so can “rob the child of the opportunity to flex that muscle.” Kids want and need to problem-solve. “I’ve been working with teens for a long time,” Morgan says. “They want to do it. They want to test those muscles.”

To help your child develop grit, talk through problems, allowing the child to take the lead in finding solutions. This means, Morgan says, asking them questions, empathizing and being a sounding board. Listening without solving “stretches a child’s distress tolerance. You’re saying, ‘You know what? I completely trust you. I know you got this,’” she says.

Self-Compassion
The ability to accept oneself, Morgan says is “where it all starts. Then we can be more compassionate to others.”

Our society is very competitive. Parents expect a lot from kids, and she frequently sees kids who are “fearful of disappointing their parents, teachers and themselves.” Fear can lead to “not trying at all — or only trying when you think you’ll succeed.”

This fear can be reinforced by parents who, at sports events, “are on the sidelines screaming and yelling.” Parents harm a child’s development of what Morgan calls an “inner cheerleader” by teaching kids the only acceptable outcome is perfection. It’s damaging because it’s unrealistic, she says. No child is perfect, and “you know you’re not going to win every game.”

Instead, parents can teach kids that failure is not the enemy, but rather an opportunity to grow. “Show compassion,” Morgan advises parents. “You don’t want to diminish disappointment but don’t let it be catastrophic.” Parents can do this by helping kids to process their disappointment. “Talk to them,” she says. “Ask, ‘What kind of outcome did you want?’”

“I see kids who get really upset if they don’t get an A or B,” she says. “But you know what? C students often turn out to be high achievers, because they’ve learned how to accept defeat and keep going.”

Empathy
In order to be successful, resilient adults, kids need to “appreciate the differences in people’s experiences,” she says. “Sympathy, the ability to say that must have been rough, goes only partway. Empathy goes to what it actually feels like. It’s that ability to put ourselves in another person’s shoes.”

The enemy of empathy is hyper-focusing on the self. And when parents hyper-focus on a child’s needs, “children learn to hyper-focus on themselves.” Morgan says it’s important for children to understand that they have needs, but other people do, too.

Parents can help kids develop empathy by “getting outside of our bubble, getting kids involved in community stuff, caring about someone else,” she says. Parents can show kids “it’s about a bigger world than whether I got my needs met today” by asking kids, “What could you do to give back to someone in the community?’” “There’s great goodness inside everyone,” Morgan says. “Kids really tap into that.”

Flexibility
While children (and adults) thrive on routine, learning to develop realistic expectations for changing circumstances is a necessary life skill, Morgan says. “The future might not be what we wanted it to be.

When you think of just the environment, the unpredictability of the world, income inequality … it’s about not expecting the world to meet them. If you’re flexible, you’ll go farther. You’ll find more opportunities and choices. If you’re not flexible, you’re frustrated all the time.”

Flexibility is a skill that some find easier to learn than others, Morgan acknowledges. Certain temperaments are more rigid, but in many circumstances, if parents don’t rush in to “rescue” their child from discomfort, parents can help their kids develop flexibility.

If a child’s chicken nuggets touch their applesauce, Morgan says, parents can respond by deflating the catastrophe.

“Ask them, ‘What’s the worst thing that can happen? Mushy nuggets?’ Or you can say, ‘I know this didn’t turn out the way you wanted. This is frustrating, but it’ll be OK.’” Morgan recommends using humor and labeling feelings to help kids learn to live and cope with discomfort. If a child is afraid of a new situation, “you can say, ‘I can walk in with you. I know it’s nerve-wracking, but it’s going to be OK.’”

Parents themselves can model this behavior by “not getting bent out shape when things come up,” like frustrations with traffic, she says. “Life is not going to go as planned. So often we don’t get what we want.”

Teaching kids to be flexible is teaching them to be better citizens, and that it’s “more important that we get along than I get what I want.”

“We know every parent wants their child to be happy and to reach their potential,” she says. “Kids are bombarded with information about themselves and who they have to be and how they should be.”

Building resilience allows kids (and their parents) to let go of “back-breaking” perfectionism and the unrealistic idea of always being number one. Resilient kids instead develop the “ability to be themselves,” Morgan says.

When they do this, “they’ll be number one at being themselves.”

Hold Onto the Benefits of Summer Camp Throughout the Year 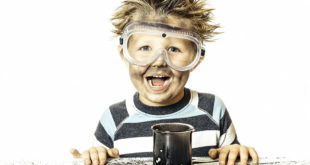