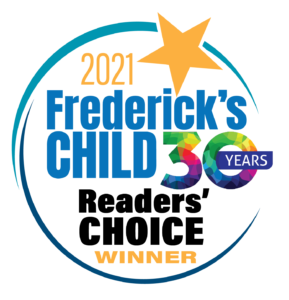 Thank you, readers, for participating in our first Readers’ Choice poll. We’ve counted all of your ballots, and the results are in. Discover the attractions, businesses, people and places that we’re honoring with our Readers’ Choice awards this year. Learn about and share the following organizations and professionals who have earned your votes. Congratulations to all of our winners and thank you to everyone who took time to nominate and vote for them this year!

Best After-School Program
Dance Unlimited, Frederick
Runner-up: YMCA of Frederick County*
The YMCA Before and After School Enrichment (B.A.S.E.) program is for school-aged children beginning with kindergarten and operates from 6:30 a.m. until the regular school day begins and after school from school dismissal until 6:30 p.m. We follow the Frederick County school calendar and offer full-day care at designated sites on days school is closed. Children receive a nutritious snack every afternoon. frederickymca.org; 301-663-5131.

Best Ice Cream
South Mountain Creamery, Middletown*
Visit South Mountain Creamery for a fun experience the entire family will enjoy. Owned and operated by the Sowers-Brusco family, South Mountain Creamery invites you to take a tour of this working farm and discover how we bring you farm-fresh milk, ice cream and more. Make a reservation to feed the calves, and before you go, stop into Karen’s Kountry Store for Frederick’s favorite frozen treat. Located at 8305 Bolivar Road, Middletown, MD 21769. southmountaincreamery.com
Runner-up: The Little Red Barn Ice Cream Café, Jefferson

Best Dentist
Frederick Pediatric Dentistry and Orthodontics, Frederick*
Frederick Pediatric Dentistry is a unique practice located in Frederick and Hagerstown. Their expert team of doctors and staff treat children in the same way they treat their own children, with comfort and safety as their highest priority. We see patients from infancy to college age. We offer orthodontics for children and adults with a complementary initial consultation. We strive for your child to have a wonderful experience in a warm and caring environment. We have been treating patients for the last 24 years.
Runner-up: Dr. David Morra, Frederick