Discover the Benefits of Summer Camp 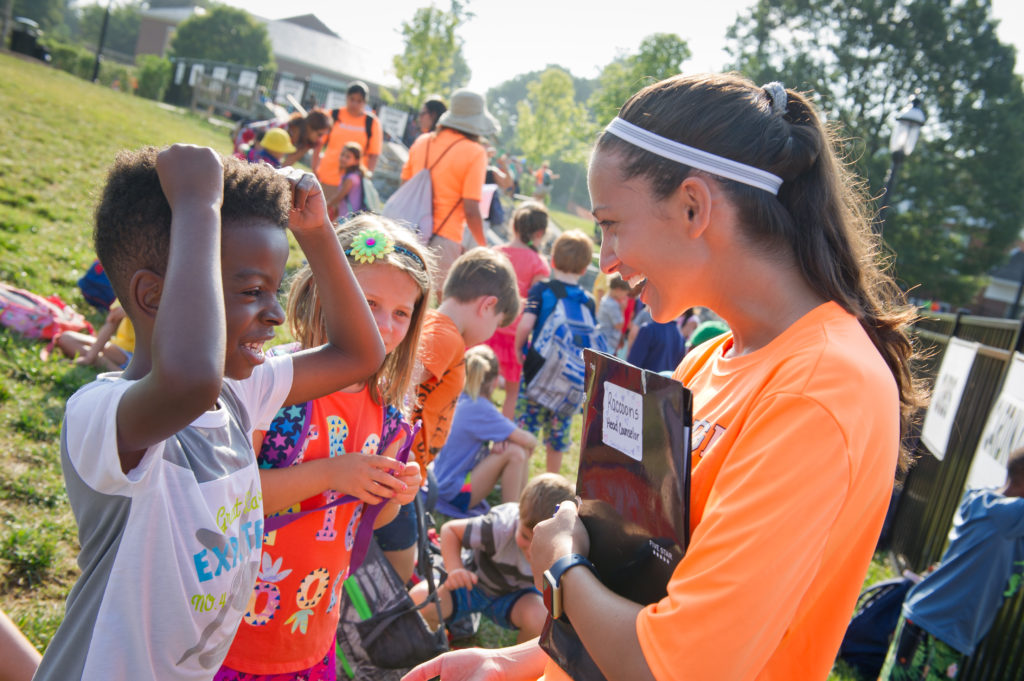 How many children attend camp each summer? According to the American Camp Association, 14 million kids and adults go to camp every summer. To understand why summer camps are so popular, Frederick’s Child asked several coordinators and directors from summer camps in the Frederick area to reflect on how going to summer camp helped shape them into the adults they are today.

Who would have thought that a terribly home-missing, 10-year-old camper would make it through a summer … and the next 40 years at camp? Yup, that was me in 1980. After one of the nurses called my mom and put me on the phone with her—which is not how it’s done today—my mom said I had to stay. I am beyond grateful that she did, even though I know she cried to my dad that they should pick me up right away. I can confidently say that I would not be the person I am today without camp.

Through the past 40 years, I have learned how to step out of my comfort zone and try something new—even as an adult. How can I talk about our three-level incredible Adventure Park—which is great for everyone else but definitely not my thing—if I hadn’t tried it out for myself? On a Friday night, when the entire camp was folk dancing in the gym, up I went with the support and guidance from our amazing outdoors staff.

I have learned about the importance of community. Camp people are like none other and they truly become a second family. They are there in good times and bad and not just for the two months of the summer. I remember as a camper being allowed to call one of my camp friends after 9 p.m. on a Sunday when the rates went down just to stay connected. How lucky are we today that we can stay in touch so easily?

Most importantly, camp gave me my family. I met my husband Neil, who grew up at Camp Airy and now works full time as our director of operations) at camp, and we are so grateful that our three daughters have had the wonderful opportunity to be at camp every summer literally since they were born. What an amazing gift! Thank goodness that my mom did not pick me up early from summer camp 40 years ago.

During a year when we are using words such as social distance, quarantine and isolate in everyday conversations, camp has never been as important to our children as it is right now. As a child, camp is a place to be silly, make some new friends, go rolling down hills, battle your way through water balloon fights, try new things and challenge yourself daily.

As an adult, I’ve come to learn the experiences that challenged me the most growing up are the same ones that shaped me into who I am today. Camp is a place where insecure or shy children learn the tools they need to become confident, assertive adults. Children can achieve so much when they are placed in a secure environment where the most celebrated things are who laughs the loudest or who is the kindest—not who has the most likes on Instagram or the most followers on TikTok.

Camp taught me the importance of adapting to new situations, respecting yourself and others and finding the joys in simple things like campfires, friendship bracelets and the search for shooting stars. Much of my success in both my career, and more importantly as a parent, I attribute to camp and being given a safe space as a child to thrive in. It’s the space where creativity and stepping out of your comfort zone are celebrated and children are encouraged to be just that—children.

I came to Camp Shoresh at age 19 to work as a camp counselor. My brother was the director, and my mother persuaded him to hire me. I was going to Johns Hopkins at the time studying for a master’s degree in business. I remember calling home and telling my parents, “I think I want to change career directions. I want to become a rabbi and work with kids.”

I just loved every part of the experience. One of my responsibilities was to say prayers with them, and I helped the kids through their prayers. I was so taken by a young boy’s interest in Judaism—he stayed up all night listening to a recording of a prayer and wanted to do a good job at praying it.

I learned a key thing: never to bring to camp any negative things that happened to you the day before. If you come in and say, “I’m great and everything is wonderful,” then the kids can really mimic your mood.

I always tried to come in with a positive mood. Camp is the most positive, wonderful connection for kids. Camp is where kids thrive. Camp is where kids discover themselves, learn skills and make new friends. The best thing for me is to go to a bat mitzvah or bar mitzvah, and you see individuals who attended camp together remaining the best of friends.

Songs, games, sunscreen, friends … these are all common words that bring memories of summer days and summer camp.

When I was 12, my parents heard that a local rod and gun club was sponsoring children to attend a Department of Environmental Conservation Camp in the Catskills Mountains
of New York. I ended up earning one of those sponsorships and headed to camp for a weeklong overnight adventure. I was nervous. I had never spent time overnight without my family or friends.

What that single week at camp did for me was more than anything I could have imagined nor really understood until years later. My 12-year-old self had an absolute blast! Looking back at that week and the two more summers I spent returning, I grew immensely from the experience. I became more independent. Camp gave me the confidence that I could do things on my own, such as being responsible for my own cleanliness and completing chores necessary for our cabin group. I gained a desire to lean into new experiences because it often meant that I found something exciting and fun. I keenly remember completing the polar bear plunge—sitting under a freezing waterfall and being named a true polar bear by biting off a chunk of moss.

The people I met were from all over the state of New York. Despite having varying backgrounds, we all shared an experience at camp that bonded us. There is also a power when you give thanks. When presenting to the group that sponsored me and providing gratitude, I was then sponsored for the following two summers. Each year, I returned to tell them what I learned and enjoyed. As a 12-year-old, I didn’t really understand all the true growth of the experience, but I’m sure the adults did.

Once I graduated from college, I returned to a different summer camp as a counselor. I learned that “home” is where you can be yourself. More important than the brick and mortar of a building was surrounding myself with an environment that I enjoyed, where I could stretch my potential and where I could trust the people around me. I learned that I could make good decisions about, and for, the campers I was put in charge of. I discovered anything was possible if you just asked the leaders.  I can honestly say that my years at camp truly shaped who I am today. I learned some incredibly important life lessons that helped me:

I decided to make camp my career choice. I left traditional academics and chose to pursue a career in youth development by focusing on important life lessons such as grit, social-emotional development and the 40 developmental assets. Camp does all these things for children, and I am so appreciative to have been given the opportunity to experience it myself.