More than just a hobby, knitters and crocheters are picking up their needles as a way to give back to the community

Aside from the inherent sense of accomplishment and pride in creating a garment or accessory, the simple act of knitting for charity can be a way for even the busiest person to give back to the community. Many hospitals and charity groups exist to connect crafters with those in need, with projects ranging from those requiring only the most basic of skills to those more challenging and time consuming.

As a weekly volunteer at a local food pantry in New Jersey, Stacy Wiener was struck by how many patrons requested toiletries along with food, since basic things like soap and shampoo can’t be purchased with government subsidies. A knitter since college, she decided to crochet a cotton washcloth and sewed it into a pouch to hold a bar of soap to give out the following week. Wiener was shocked by the response at the pantry, not just from the recipients of her soap sacks, but also from other volunteers who quickly signed up to make more of them. As the number of soap sacks created and distributed began to grow, so did the sense of community among the volunteers knitting and crocheting them, which is something that Wiener is particularly proud of.

In September 2017, Weiner launched the non-profit organization S.A.C.K. (Supporting a Community with Kindness) to collect additional handmade soap sacks for donation, and today, soap sacks are knitted or crocheted in all 50 states. Some are sent to Wiener to donate, while others are donated by crafters to the local food pantry or homeless shelter of their choice.

Even though soap sacks take less than an hour to create, and the costs for the yarn and bar of soap are minimal, crafters feel like they are really making a difference. Not only is there a “sense of dignity in being clean,” says Wiener, but recipients feel “loved” by the notion that the soap sack was handmade.

One Montgomery County Public School (MCSP) teacher and mom is also proving that something very small can make a huge difference in someone’s life.

Maura Moore is “a middle school teacher trying to help heal the world one crocheted emotional support orb at a time,” according to her Instagram bio. Based on a knitted “black hole” she saw about 10 years ago on Etsy, Moore’s orbs are small and plush — about the size of a Mandarin orange — with shiny, black eyes. Moore gave the first “orb” she crocheted to her husband when they were going through difficult times and was surprised to see it always in his pocket or in his hands, not tucked away forgotten in his sock drawer as she had imagined. So she crocheted a few more and brought them to school.

When one of her middle school students was struggling with “life-y things,” Moore gave her a yellow orb named “Sunshine” as a pick-me-up. As with her husband, Moore’s student was always holding hers, carrying it around everywhere.

Moore knew she was on to something when another student asked if she could have one to hold while taking a test to help relieve her performance anxiety. When Moore asked her if the orb had helped, the student said yes and called it her “meep.” Moore, an avid Beatles fan, loved the name and christened her movement “All You Meep is Love.”

Since all this began in March of 2019, Moore estimates she has made and handed out more than 1,000 meeps, which she makes at night while watching TV or riding in the car on family trips. After Moore’s meeps were featured on a local website, co-workers in 8 to 10 MCPS locations have joined in the creation of these crocheted orbs, which they give out to students, teachers and administrators — just about anyone in need of a boost or a pat on the back. In her 6th grade English classes, Moore names a “Meep of the Week,” and the honored student gets to select an orb from a small collection she keeps in her classroom.

Moore’s community has been great about supporting her project, donating yarn, specific “meep” eyes that are safe for all ages and Poly-fil to stuff them. Donations show up at her school or in her mailbox on a regular basis.

“I am in awe every day of what the meeps are doing and how all of these amazing people in my life have come out in support to help spread this message of love, kindness and healing,” says Moore. She doesn’t charge for the meeps or for the pattern to make them, asking only in return that they not be sold and that her “All You Meep is Love” message continues to spread.

A longer version of this article appeared in the February 2020 issue of Washington FAMILY magazine.

The 10 Best Places to Get Ice Cream in Frederick 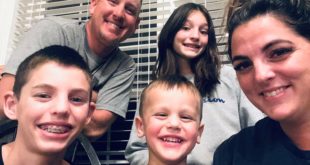 Parent You Should Know: Amy Smith